By: Patrick Ball, Patch Editor  [Heard some news you want us to check out?]

Rome wasn’t built in a day, but the big, beautiful home on the corner of Wood Street and Bates Road was.

With upscale features like coffered ceilings and granite countertops, the home hardly seems cookie-cutter.  So it may surprise some to hear that this 3,500-square foot custom colonial was a modular construction and its base boxes came together in a matter of hours one Tuesday in late October.

But that’s all in a day’s work for Doug Carlson and Kristopher Megna, the managing partners behind Dreamline Modular Homes, a Lexington-based builder specializing in the design and construction of custom modular homes.

After growing up in the construction industry, and earning business degrees from Roger Williams, Carlson and Megna ventured out on their own and zeroed in on the Lexington area as an ideal place to launch their company.

“It’s knockdown, rebuilds,” said Megna.  “We’re in a community where there’s a wonderful school system and you’re obviously going to have a house where you want the four bedrooms, two baths.  We compete very well with stick builders and we just want to provide a home where its and affordable home and they can get in and they can live the dream where they can send the kids to the school system they want to.”

According to Carlson and Megna, Dreamline is trying to break all the stereotypes of modular building with new construction catch phrases.  They tout upscale options like 10-foot coffered ceilings, hardwood floors, granite countertops, Anderson windows and HardiPlank—while, in most cases, keeping within an affordable price range.

“It’s not what it used to be,” said Carlson. “You can’t tell the difference anymore.  It’s progressed so fast that it jumped that phase where you can tell what’s modular and what isn’t”

According to Carlson and Megna, Dreamline will take homeowner from the design and permitting process right up through residency.  The home featured in this video was set on Tuesday, Oct. 25 and the photos at the beginning and end were taken on Tuesday, Feb. 7. 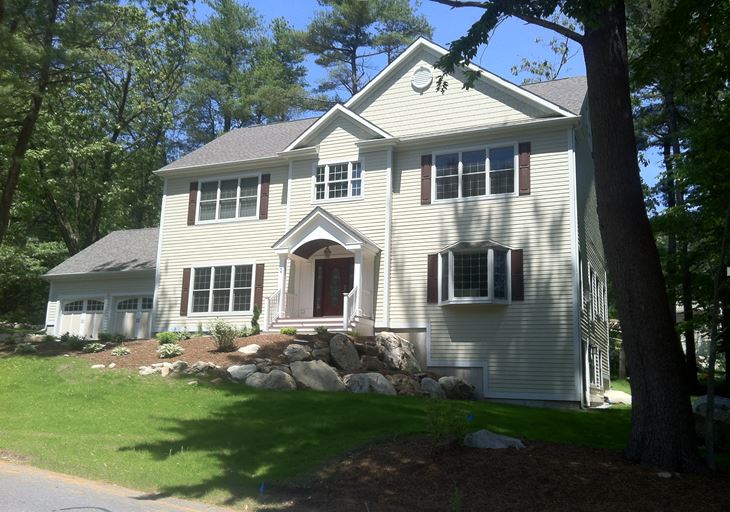 A Dreamline Modular Homes project, this 3,500-square foot custom colonial in Lexington essentially got built in a matter of hours during a weekday in late October.