BUILDING DREAMS WITH THE COVENANT PROGRAM

Doug and Kris each grew up around the construction industry. The two friends met in college, and even back then thought about starting their own company. Junior year, Kris wrote a business plan for a modular home construction company, which planted the seeds for what was to come. Soon after graduation, the friends partnered to form Dreamline Modular Homes, a full service design/build firm specializing in the
construction of custom modular homes.

Eleven years later, Dreamline Modular Homes was a huge success. Doug and Kris knew there was a home construction demand on Nantucket, but they were already very busy in the Boston area. A college friend who wanted to build a modular home on-island begged them to reconsider. Doug and Kris finally agreed. The first build went well, and they realized that they could incorporate construction on Nantucket into their current business operations. With increased demand, word spread fast, and on-island business continued to grow.

Doug and Kris had always dreamed of moving with their families to Nantucket full time. “We love the community feel,” said Doug. “It’s so different compared to many of the Boston suburbs that we currently build in.”

They knew about the Covenant Program through word of mouth. One of the modular build projects created a Covenant home and was profiled by Housing Nantucket as a success story. They understood how the program allowed a property owner to subdivide a lot that could not be split under normal zoning means.

Although they had built hundreds of homes for others, neither one of them had owned a home of their own. After spending more and more time on the island, they found an opportunity to purchase a large parcel of land. Realizing how the Covenant Program could help them obtain their dream of moving to Nantucket, they were able to create four lots – a market- rate lot for each of them, and two Covenant properties they would sell to Nantucket year-round families.

“The project and program have been great,” said Doug “We are thrilled to be given this opportunity to become part of the community while also giving others the same opportunity to own a Covenant home.” 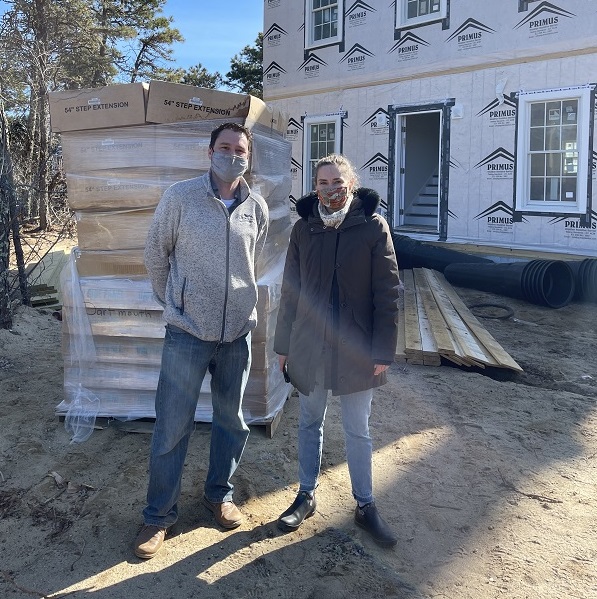